We rather like the Huawei Wi-Fi Mesh 7 (£270) – a simple Wi-Fi 6 mesh that offers good performance at an average price. And for those on a tighter budget, the Mesh 3 offers a similar experience in a smaller package. It doesn’t have as much bandwidth, as it uses a dual-band radio network rather than a tri-band network, but you get three stations for the very reasonable sum of £200.

While the Huawei Mesh 3 can’t match the speeds of more expensive systems, it offers respectable coverage and has some nice features – in terms of hardware and software – that might make it an attractive choice for the price.

Huawei Wi-Fi Mesh 3 review: what you need to know

The Mesh 3 is a three-node Wi-Fi 6 mesh system. Each station has two radios: a 2.4 GHz radio capable of up to 574 Mbps and a faster 5 GHz radio capable of reaching connection speeds of up to 2.4 Gbps. While it’s pretty fast, the 5GHz radio has to do double duty, handling traffic to and from your connected devices while transferring data between stations as needed. More expensive tri-band systems such as the Mesh 7 use a separate radio for the backhaul, so there is no need to share bandwidth.

The design of the stations is almost identical to the Mesh 7 units but these are smaller, with only three ethernet sockets on the back instead of four. Huawei says these three units will offer the same coverage as two of the larger models, up to a total of 600 square meters.

Unsurprisingly, the Mesh 3 doesn’t support the new 6E Wi-Fi standard — we’ve only seen a handful of routers and meshes that do — but it will still work with 6E-enabled devices, using a regular Wi-Fi 6 connection. . You can also connect older computers and phones that use Wi-Fi 5 or even the aging 802.11n standard, though these won’t get all the performance the Mesh 3 is capable of.

READ NEXT: Our roundup of the best mesh Wi-Fi routers

Although the Mesh 3 is a very affordable mesh system, it’s not the cheapest we’ve tested. The Tenda Nova MW3 offers three units for a ridiculously low price of £60, although that’s only really suitable for light use: we’re talking peak download speeds under 10MB/sec.

More compelling options include the £129 BT Mini Whole Home Wi-Fi Mesh or the £145 TP-Link Deco P9. However, both of these systems are again limited to Wi-Fi 5, meaning they won’t be able to keep up when dozens of devices connect at once.

For this reason, most people buying a mesh today should opt for a Wi-Fi 6 system. Here, the best value we’ve seen is the D-Link M15 Eagle Pro AI AX1500, which costs just $164 £ for a three-node pack, but this, as we’ll see below, is a bit slower than the Mesh 3.

If you’re willing to pay a bit more, the Netgear Orbi RBK352 and TP-Link Deco X50 are worth a look, costing £230 and £200 respectively. However, for next-level performance you’ll have to pay a bit more: Huawei’s own Wi-Fi Mesh 7 is a good mid-priced option, or if you’re looking for the best download speeds you’ll have to consider the Linksys Atlas Pro 6 at £380 or the TP-Link Deco X90 for £440.

The Mesh 3 units have the same oblong tower shape as the Mesh 7 units, but they’re a bit smaller, with a modest height of 174mm. This makes them much nicer to have around your home: they don’t look the same, and they’ll nestle much more discreetly on shelves and countertops.

Despite its small size, the Mesh 3 retains the two distinctive physical features of the Mesh 7, namely the WPS button on the front and the integrated NFC tag on the top that lets you connect Android devices with just a touch. The red and blue LED also stay on top, providing a very basic indication of each node’s status.

Power consumption is also quite similar for both systems. I measured a maximum power consumption of 9.3W for the main Mesh 3 node, dropping to 7.4W when idle, while the second and third nodes were idle at 6W lower. For comparison, the Mesh 7 twin units idled at 10.3W, peaking at 13.9W under heavy load.

The only thing that’s really reduced compared to the Mesh 7 is the Ethernet provision, which goes from four gigabit ports per unit to three; it’s still better than many other meshes, giving you nine connectors in total.

The Huawei AI Life smartphone app walks you through the initial setup of the Mesh 3, and for me it went without a hitch. The units all connected to each other seamlessly and I only had to answer a few questions about my preferred network name and password.

For ongoing management, however, I didn’t get along very well with the app. It wasn’t easy to find and adjust the various controls and settings, and the styling and layout seemed inconsistent from page to page. Still, with a little tapping, you can do all the important things, such as setting up port forwarding and IP address reservation. Uniquely, the Mesh 3 also supports band splitting, so if you wish, you can segment your home network into separate 2.4 GHz and 5 GHz mesh networks.

The standout feature is the in-app heat mapping tool, which lets you sketch out the layout of your home, then walk around with your phone in hand and track the variation in signal at different locations. This information can help you position the three nodes for the best coverage – a neat idea that I’ve never seen integrated into any other mesh app. However, creating your floor plan on a cramped touchscreen can be tedious, depending on the layout of your home.

If you don’t like the app, you can also administer the Mesh 3 from a traditional web management interface. I found it much cleaner, and the web interface also offers basic outbound VPN support, which isn’t available in the app – although it only supports L2TP and PPTP connections. However, there aren’t many security or parental control options: just a basic firewall, a manual URL block list, and time limits per device.

Based on the price and dual-band design, I didn’t expect the Mesh 3 to match the performance of the Mesh 7. Even so, its 5 GHz radio has good bandwidth, with 160 MHz channels and 2×2 MU-MIMO, so there’s potential for high speeds.

I tested them by configuring the Mesh 3 in my usual configuration, with the main node of my study, connected via Ethernet to both my Internet modem and an Asustor Drivestor 4 Pro NAS device. The second unit was installed at the opposite end of the adjoining bedroom, the third in the downstairs living room.

I then connected to the network from my usual test laptop (equipped with an Intel AX210 Wi-Fi 6E network card), transported it to various points in my house and measured average file copy speeds to and from the NAS over the mesh network.

Here are the results, along with comparable numbers for some of the competing mesh systems mentioned above: 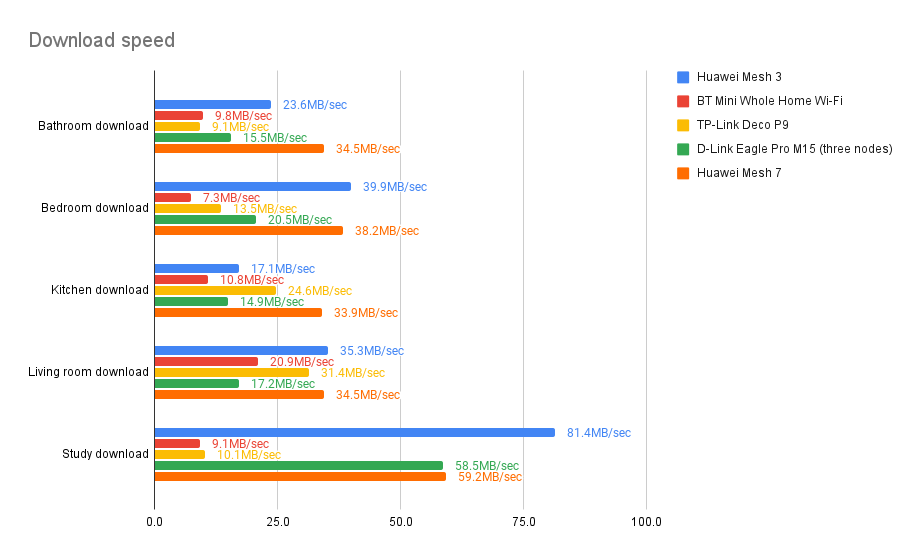 We can immediately see that the Mesh 3 is overall faster than Wi-Fi 5-based systems from BT and TP-Link. These older meshes were tested with the main node in the living room rather than the study, so performance in individual locations is not directly comparable, but clearly their performance range is well below this that a Wi-Fi 6 mesh can achieve. .

However, compared to more expensive meshes, the Mesh 3 lags behind. Even the Orbi RBK352 was found to be a bit faster overall, for a modest £9 extra. Perhaps more importantly, it hasn’t suffered such a dramatic drop in performance in the kitchen, suggesting it will hold up better than the Huawei in areas of marginal coverage.

Beyond that, you’re in the business of tri-band systems. I had hoped the Mesh 3 might punch above its weight, but the speeds I’ve seen clearly show that it’s not in the same league as high-end Meshes costing £270 and up.

Huawei Wi-Fi Mesh 3 review: should you buy it?

The Huawei Wi-Fi Mesh 3 won’t shake up the world of mesh Wi-Fi. Like its larger cousin, it fits right into the established market, offering a reasonable level of performance at a reasonable price.

Its appeal therefore depends on your needs. For many homes raw performance isn’t as important as stable coverage: for them the D-Link M15 (£164) might be a smarter buy. While it doesn’t remotely approach the full performance potential of a mesh Wi-Fi 6, it’s fast and wide enough to support 4K video streaming throughout your home.

For those who just want a little more, however, the Huawei Mesh 3 offers a real performance boost while keeping the cost manageable. The obvious spoiler is the Orbi RBK352 (£230), which offers smoother speeds at a very similar price point. However, the Mesh 3’s three nodes give you more flexibility than the two you get with the Orbi, and Huawei’s NFC support is a nice extra. Factor in the heat-mapping tool and generous Ethernet support and you might just conclude that the Mesh 3 is the right mesh at the right price.